Situated at the heart of the Albertine Rift, Rwanda is one of Africa’s most biodiverse regions and a haven of rainforest endemism. Its most celebrated wild mammal is the iconic mountain gorilla of the Virunga Massif. A densely-populated country with most people living in rural areas, Rwanda has shown great courage in  recovering from the memory of the 1994 genocide. Today, Rwanda is a stable, well-run and peacefully united country. The optimistic energy of the people has earned their country the moniker ‘Remarkable Rwanda’ and it regularly features on ‘must-visit’ lists. 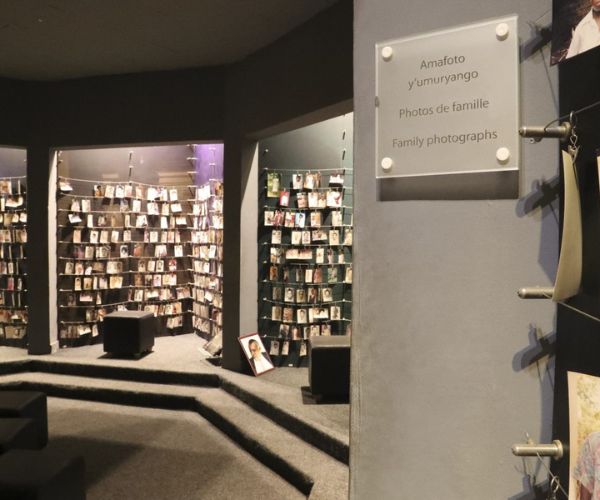 Before going out of the capital and to Rwanda’s famous national parks, you will probably want to visit the Genocide Memorial Center in the capital Kigali. The Museum holds the remains of about 250,000 people who were brutally murdered by the Interahamwe (Hutu extremists). The center is divided into three sections – one for children killed during the genocide, another for adults and the final for genocides that have occurred in different parts of the world.

While at the site, you will learn a lot about what transpired before, during and after the 1994 genocide. You can watch short videos about the tragic event or listen to what the resident Guides have to say. The experience can be emotional but the main purpose of the displays is to teach people (especially the young generation) about the horrors of genocides so that it never happens anywhere else again. 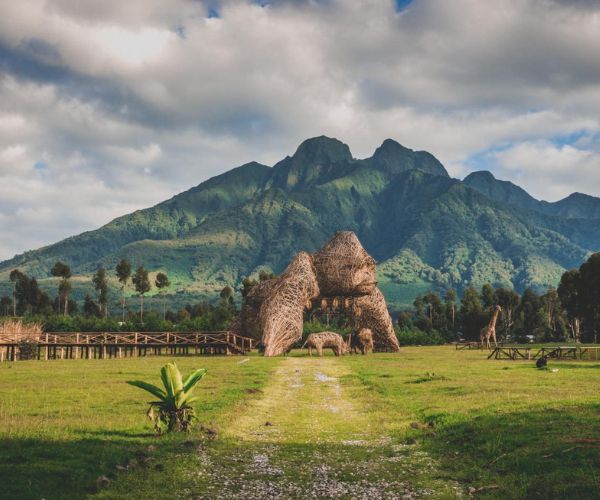 The Volcanoes National Park is arguably the most visited wildlife conservation site in Rwanda. Each year thousands of international visitors go to the park to see mountain gorillas alongside other popular activities in the park. The park has 10 habituated gorilla groups and only 8 people may track a group in a day. Gorilla trekking in the Volcanoes National Park starts with a briefing at 7am from the park office in Kinigi.  From there visitors are taken out to track one of the gorilla groups in the company of armed Guides. Gorilla trekking is one of the most unforgettable experiences while visiting Africa. Why? Because it involves an encounter with creatures that resembles us humans. Gorilla permits in Rwanda cost from $1500 per person. 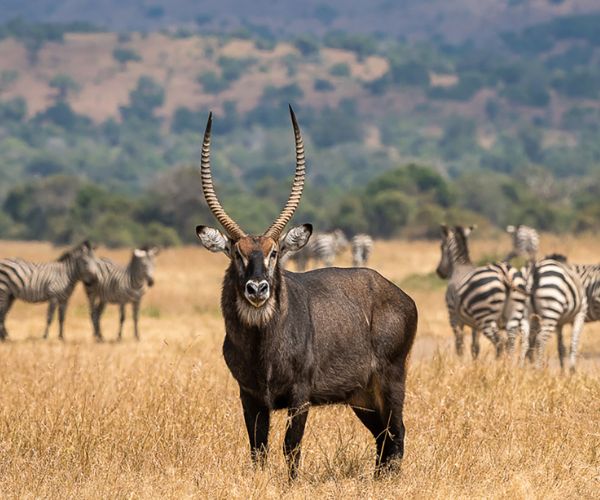 With all talk focused on mountain gorillas, it is easy to forget that Rwanda is also excellent for game drives and standard wildlife safaris. Akagera is Rwanda’s only savannah park covering an area of 1,085 square kilometers.

It was established in 1934 but the park lost a significant number of wildlife during the 1994 genocide. Thousands of fleeing citizens used the park as an escape route to seek safety in neighboring countries. When the genocide ended, many chose to settle in parts of the park leading to uncontrolled poaching and encroachments.

When the African Parks Network teamed up with the government to manage the park, the number of wildlife increased and species that had been lost were re-introduced. Akagera National Park is composed of swamps, savannah plains, woodlands, lakes, rivers and terraced hills. It is now home to all the Big 5 animals (Lions, Rhinos, elephants, Buffaloes and Leopards) hence offering tourists a chance to experience a full wildlife safari in Rwanda (Taking into consideration other activities like gorilla trekking, chimpanzee tracking, cultural encounters and mountain climbing). Akagera is also home to olive baboons, blue monkeys, vervet monkeys, hyenas, leopards and hippos to mention a few. Apart from standard game drives, Akagera is excellent for birding, nature walks and sport fishing in Lake Shakani. The afternoon boat cruise along Lake Ihema is very popular too and rewards tourists with beautiful scenery and encounters with aquatic birds, crocodiles, hippos and antelopes drinking by the Lake shores. 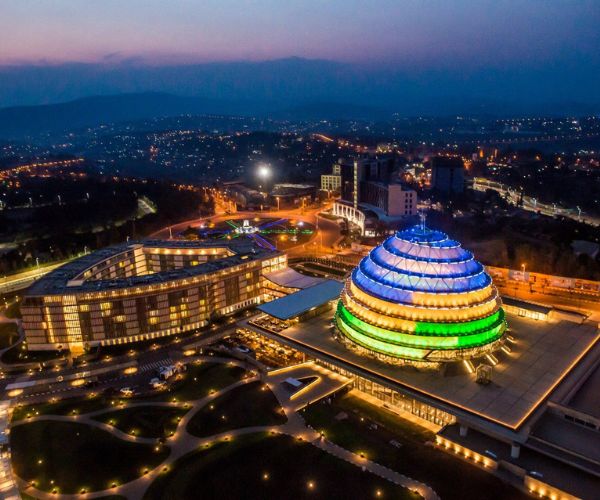 Rwanda’s capital, Kigali, straggles over several hills, with the city centre on one and the government/administrative quarter on another.

The centre of Kigali is bustling, colourful, noisy but clean and safe. Its occupants, from smart-suited business people to scruffy kids, go about their activities, only lessening their tempo briefly in the middle of the day.

Peaceful tree-lined residential streets stretch outwards and generally downwards from the city’s heart, and give visitors ample scope for strolling. 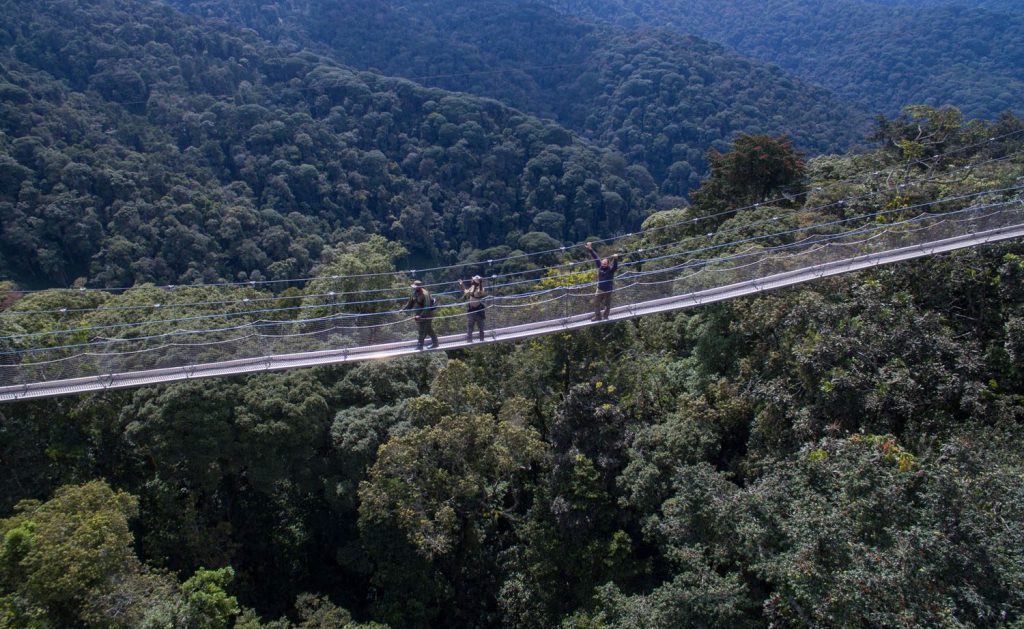 One of the oldest rainforests in Africa, Nyungwe is rich in biodiversity and spectacularly beautiful. The mountainous region is teaming with wildlife, including a small population of chimpanzees as well as 12 other species of primate, including the L’Hoest’s monkey endemic to the Albertine Rift. With 15 trails, along with various other activities, visitors can choose to sample the delights of the forest or indulge themselves for a week or more in one of Africa’s most stunning forests.

Primate tracking tops most visitor’s list, but it’s worth lingering a little longer for those with time to relax and take in the primal atmosphere. There are 75 known mammals in Nyungwe, such as the serval cat, mongoose, congo clawless otter, and leopard to name but a few.  Memorable and photogenic moments include walking up to the Isumo waterfall or along the Canopy Walk suspension bridge.

Volcanoes National Park is part of the larger Virunga Massif transboundary conservation area and a World Heritage Site. It is home to some 604 mountain gorillas, amongst a host of other rainforest species.

Meanwhile, Akagera National Park has undergone a phenomenal transformation in the last eight years where poaching has essentially been eliminated and wildlife is now thriving.

Rwanda has a temperate tropical highland climate, and – thanks to its high elevation – lower temperatures than you would expect for an equatorial country. Kigali’s daily temperatures range from 12°C (54°F) to 27°C (81°F), with very little variation throughout the year. The mountainous north-west, where Bisate is situated, is generally cooler than the lower-lying east of Rwanda. Rwanda experiences two rainy seasons: the first is from around February to June and the second, from September through December. These are separated by two dry seasons: June to September, during which there is often no rainfall at all, and a shorter dry period from December to February. Typically the west and north-west of Rwanda receives more rainfall than the south-east and east of the country.

Passports are required by all foreign visitors and must be valid for 6 months after the intended length of stay. Please ensure that you have at least 2 consecutive blank visa pages (not endorsement pages) in your passport. Our recommendation is 3 or even 4 blank pages if you are travelling through more than one country. If there is insufficient space in the passport then entry could be denied.

It is imperative to check visa requirements with the Ugandan and Rwandan embassies as it may vary according to your nationality.

Where visas can be obtained at port of entry, fees are payable in USD cash only and we recommend small dominations as officials are not in the position to give change.

It is recommended that travellers obtain their visas prior to arrival, as there is a likelihood of long queues at all airports.

Uganda uses 240 volts and this means that you will need UK plug. A converter plug can be bought and should be fitting locally. For power issues, it is advisable that you spend a night in a hotel or lodge with stand by generator to avoid any kind of disappointment when it disappears.

Please consult your physician before you travel to Africa for advice on precautions against malaria.

Uganda and Rwanda fall into the yellow fever region of Africa. It is imperative that you obtain a Yellow Fever vaccination no less than 10 days prior to travel. Your country of origin and other African countries may deny re-entry without the vaccination, after having visited a country with Yellow Fever.

Send us an email